For those who live under a rock, Magic celebrated its 25th birthday with a Pro Tour in Minneapolis, Minnesota. For the first time in a while, Pro Tour 25th Anniversary was a team format featuring three constructed formats – Standard, Modern and Legacy. It marked the first time Legacy has ever been played at the Pro Tour.

Wizards of the Coasts posted all of the Modern decklists HERE. There were five Storm pilots at the event, but despite the small number, some big names chose Storm as their weapon for the Pro Tour. Long-time Storm proponent and one of the three best Magic players ever Jon Finkel played Storm at Pro Tour 25th Anniversary along with fellow Hall of Famer William “Huey” Jensen, platinum pro and former world champion Seth Manfield and Martin Muller. All four played the same list with Chih-Cheng Yeh playing very similar to Caleb Scherer’s build. 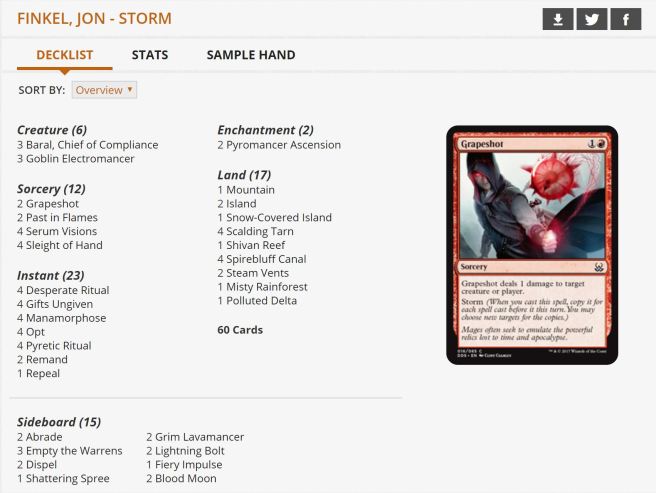 My second observation is the split of Baral, Chief of Complaince and Goblin Electromancer. I go over this in my FAQ section above, but to recap slightly, the legendary clause on Baral rarely matters as Storm often needs just one bear in play for a kill. The 1/3 body on Baral is also very relevant for blocking two-power creatures of the format and surviving Collective Brutality. Finally, the looting ability on Baral helps sift through our deck. I’d be really curious to hear the pros’ rationale on the 3/3 split.

My third observation is the presence of only two Grapeshot main deck. Previous versions of Storm with Pyromancer Ascension have played just two Grapeshot and it’s likely correct in a build like this with the extra Ascension engine. I’m a strong advocate for three Grapeshot in the main deck of traditional Gifts Storm builds as the ability to double Grapeshot an opponent out of the game without needing the graveyard is very relevant.

My fourth observation is the land base. Caleb Scherer has pioneered a land base that doesn’t use fetch lands in order to preserve library order, making Scry’s more powerful. Obviously, fetch lands have their benefit as well, allowing more sources of both colors of lands in the deck. I say this in my FAQ section, but I don’t believe in playing fetch lands that aren’t Scalding Tarn. Having to fetch a Steam Vents untapped can be very costly often in Modern, and Shivan Reef, the land that replaces fetch lands, seldom pings you more than twice (the only exception being Shivan Reef(s) as the only land(s) early in the game).

My fifth observation is some interesting sideboard cards, particularly the two Grim Lavamancer and the Fiery Impulse. I’ve seen Grim Lavamancer in sideboards before (from Andrew Shrout in particular). I can’t speak a ton on the Lavaman as I haven’t played it in a long time, but I’m intrigued at the very least. It seems good against some of the more aggressive decks in the format, especially if it comes down early.

The one I’m having a difficult time figuring out is Fiery Impulse. It’s a differently-named card then Lightning Bolt and Abrade against Meddling Mage, but worse than the third Lightning Bolt in general as it can’t go to the face. That along with Blood Moon and Grim Lavamancer, this sideboard seems particularly setup to battle Humans. I’d be curious to hear their sideboard plans in the matchup.

Yen is playing a list very similar to Caleb Scherer’s list with the fetchless mana base. The only differences are playing the fourth Baral, Chief of Compliance over a Repeal and a Lightning Bolt instead of the a third Opt. I don’t dislike these changes and think it depends on what field you expect to face. Yen did miss out on the free opportunity to play Snow-Covered Island(s).

What do you think about the Finkel/Jensen/Manfield/Muller list? Things you like/don’t like? Let me know in the comments!

One thought on “Storm at Pro Tour 25th Anniversary”