Wow. I can’t believe Wizards of the Coast (WOTC) actually did it. In what’s likely one of the biggest shakeups the Modern format has had via a Banned & Restricted Update, WOTC laid this bombshell on Monday morning.

The first card, Hogaak, Arisen Necropolis, is no surprise to anyone who has paid attention to Modern since Modern Horizons came out. Despite 477 copies of Leyline of the Void being registered at the most recent Modern Mythic Championships, Hogaak decks still performed the best (day two conversion, winning percentage) at the tournament and had showed no signs of stopping afterwards. The deck was simply too powerful, too consistent and too difficult to stop for Modern.

It’s the other two cards I wanted to address today. WOTC could have unbanned Stoneforge Mystic a while ago, but has been fearful of doing so because of lack of diversity in the format (e.g. all fair decks would play Stoneforge Mystic, aggressive decks can’t exist, etc.). Only time will tell if it was a wise move or not. Faithless Looting as been the culprit, in my opinion, of the various broken graveyard strategies we’ve seen over the past several years. From my memory, Faithless Looting began seeing playing in Dredge and Mardu Pyromancer and has continued to enable decks to abuse cards like Arclight Phoenix and Hogaak. I am perfectly fine with WOTC making the decisions it made today, though I didn’t think we’d ever come to the day of Faithless Looting hitting the banned list.

Now time for what you all came here for. What impact will this have on Storm? The true answer is only time will tell, but I’ll give my thoughts and predictions.

Prediction No. 1 – Empty the Warrens gets worse, isn’t playable in the main deck.

This one is a pretty safe prediction as it is directly correlated to Stoneforge Mystic. For those who haven’t encountered this interaction in Legacy, it takes a LOT of goblins tokens to beat a 4/4 lifelinker that also has vigilance. How many to be exact? Thanks to TheEpicStorm.com’s data page, it takes 18 goblins to beat a Batterskull turn three on the play and turn two on the draw. In the rare occurrence that we can generate goblins on turn two, Storm needs 14 goblins to beat a Batterskull.

Prediction No. 2 – The UW and BGx matchups get worse.

BGx decks, where Empty the Warrens has been very good, now have access to Plague Engineer. This along with prediction No. 1 means that one of Storm’s best tools, waves of goblin tokens, aren’t as effective. Because of this, I believe both matchups have gotten more difficult. That doesn’t mean they are unwinnable by any means, however.

Prediction No. 3 – The format slows down.

Despite the UW and BGx matchups being slightly worse, I believe both of those decks in the format slows Modern down by a half turn to a turn. How does this effect Storm lists? I’m starting with seven mana bears (Baral, Chief of Compliance and Goblin Electromancer) as well as potentially adding a third copy of Remand. I could see even going down to six mana bears, but wouldn’t ever play less than that. Additionally, more expensive sideboard cards (e.g. Fact or Fiction, Chandra, Torch of Defiance, etc.) could become more appealing.

Prediction No. 4 – Graveyard hate, specifically in the main deck, decreases.

With Faithless Looting getting the ax, decks that utilize the graveyard significantly will decrease in popularity, which, in turn, decrease the amount of graveyard hate in the format. How does this affect Storm? I think Storm will become much more streamlined in the main deck aiming to kill the opponent swiftly and consistently. I don’t think there’s a need for alternate win conditions like Empty the Warrens or Aria of Flame in the main deck.

Prediction No. 5 – Big mana decks such as Tron and Valakut Titan re-enter the format along with Grixis Death’s Shadow.

Big mana decks prey on midrange decks. If Stoneforge Mystic is a big player, it’s only going to be a matter of time before the big mana decks begin to see play. These are good things for Storm for sure (along with Burn not being played as much), but I suspect one of Storm’s nemesis’s, Grixis Death’s Shadow, will pop up again.

The list above is what I’m currently testing. I tried Blood Moon for a few matches and didn’t like it because of Arcum’s Astrolabe and Wrenn & Six. A couple notes on this below.

A Note on Twiddle Storm 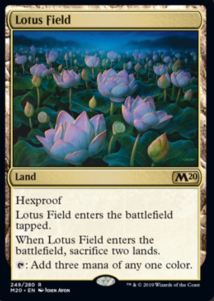 For those who haven’t seen it yet (there’s a bunch of searchable content on YouTube), a new Storm deck has popped up utilizing an M20 card in Lotus Field. The basic idea of this deck is to assemble the hexproof land with a bunch of effects that untap it to gain mana. Additionally, the card Psychic Puppetry can be spliced onto a bunch of Arcane spells to cast spells for free (given you get three mana off of Lotus Field). The kill condition of the deck to this point has been Past in Flames with Grapeshot.

I have gotten and seen SO MANY questions, opinions and thoughts on this deck. I have read a lot on the deck, watched it and played it in a couple leagues on Magic Online. Is Twiddle Storm better than the standard Gifts Storm? The real answer is we don’t know, but here’s what I’ve gathered so far.

Number six is perhaps the most important. In it’s current iteration, I believe Gifts Storm to be a better deck than Twiddle Storm, but I’m VERY excited to follow and perhaps contribute to this deck’s development.

Well there you have it, nearly 1,500 words on Storm after the Banned and Restricted Update. How do you think Storm will fair in Modern? How do you think the Modern metagame will look? Let me know in the comments or on Twitter @StormModern!

Until next time, happy Storming!