Hello Stormtroopers and happy Ravnica Allegiance prerelease weekend! I’m not able to attend a prerelease this weekend, but I did want to take some time to think about some cards in the set and their possibilities in Storm. Due to the Izzet guild not being in Ravnica Allegiance, Storm won’t get any possible multi-colored cards without dipping into a third color. Even still, there are some exciting possibilities. Without further ado, let’s dive itn

This is the card I’ve heard the most buzz about, and for good reason. There’s no denying the power level of Electrodominance. Being able to cast cards without mana costs such as Ancestral Vision, Wheel of Fate, Restore Balance, or Living End at instant speed is absurd and can definitely fit in the Modern format somewhere in my opinion.

But where does this fit in Storm? The real answer is we don’t know yet, but we can speculate! First, let’s look at using Electrodominance in a combo fashion. The two obvious cards to use are Ancestral Vision and Wheel of Fate.

With Ancestral Vision, if we are casting Electrodominance as soon as possible, it would require two mana and two casts (Electrodominance and Ancestral Vision) to draw three cards. There’s also a Gut Shot tagged onto it, so if that one mana kills something, then there’s generated value there. Personally, I don’t think that’s enough value for the cost that’s required – two mana and having two specific cards in hand.

With Wheel of Fate, I think there are more possibilities. Being able to start a ritual chain and cast Electrodominance with Wheel of Fate and gain virtual card advantage due to the opponent having to discard more cards than us. In this instance, Electrodominance can act as a removal spell and Wheel of Fate as an engine. This possibility intrigues me, but I think it requires the deck to be built quite differently. Feel free to pass along any builds you may have by commenting here or tagging @StormModern on Twitter.

The second possibility of this card as I see it would be to insert it into relatively the same core Storm plays now. Paying three mana (without the ability to cost reduce off of a mana bear) to do one damage to any target and play a cantrip in our hand is a possible line of play, but I find that is very inefficient. In the best case scenario, Electrodominance is a free shock with a mana bear out and a ritual in hand.

In summary, Electrodominance has the power level to be playable in Modern, but I don’t think it’s in Storm. I’d expect it being played in a Restore Balance with As Foretold or something like that. If Electrodominance sees play in Storm, I think it will be in a Wheel of Fate shell.

The next card that peeked my interest was this little one  – Shimmer of Possibility. After seeing this soiled and taking a little time to evaluate, I, in theory, peg this card as a slightly better version of Anticipate and Strategic Planning. I don’t tend to value instant speed as much as other Storm players, and I’d rather have a look at a fourth card than putting the other two in the graveyard (especially postboard). I also like this card better in a vacuum than Peer Through Depths as it grabs any card. Peer Through Depths is obviously better on the combo turn.

Storm played two-mana cantrips in small numbers before, but that was before Opt was printed in a Modern-legal set. Will Storm ever go back to playing two-mana cantrips? I don’t know. But if it does, this card would be near the top of my list. 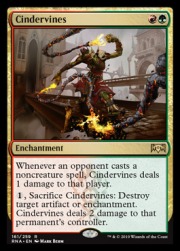 The final card I’d like to discuss is a potential piece of hate in Cindervines. While this card would like comboing off with Storm more difficult, what deck in Modern would play it? The one that comes to mind immediately is Burn, but Eidolon of the Great Revel is better than the first half of this card and Destructive Revelry is the second half of the card. Maybe Burn or a Zoo deck would play this card? Only time will tell, but I don’t see this being a wide-spread card in Modern, especially given its mana cost.

Those were the cards that caught my eye that could impact Storm out of Ravnica Allegiance. Did I miss any? Let me know! Again, happy pre-releasing everyone.