A QUICK INTRODUCTION – My name is Mitch Blankespoor, or mblanko on MTGO and Twitch. I work in collegiate athletics full-time as athletics/sports are my first love, but I also love Magic: The Gathering and Modern Storm in particular! I’ve always enjoyed watching Caleb play the deck on the SCG circuit and was quick to follow and subscribe when he began streaming on Twitch. I have been playing Magic since the original Innistrad block. Due to my full-time career, I seldom can travel to big events and mainly play locally and online. I don’t claim to be an expert with Modern Storm by any means, but I thought I would assist the Storm community and help us all (myself included!) improve piloting the deck with this series.

I’d also like to give a shout-out to my good friend, Brandon Dollaway (@dollawab on Twitch). We talk through a lot of Storm lines together and his input helps and will help this series greatly. Finally, I’d like to thank Caleb for his input with the series and talking about it on his stream.

THE SERIES – My idea for this series spawned in watching Caleb’s streams and his decisions with the card Gifts Ungiven. I’m also a frequent visitor to Bryant Cook’s website dedicated to The Epic Storm (TES) in Legacy. There are a lot of articles about improving your play with TES and I felt like there’s a void for that with Modern Storm!

For anyone who has played Modern Storm (in its current iteration) before, it’s no secret Gifts Ungiven is one of the key engines to the deck. Often times, we have, to quote Caleb, “a deterministic kill” with Gifts Ungiven. There are a number of standard piles (Pyretic Ritual, Desperate Ritual, Past in Flames, Manamorphose with three mana floating and Baral, Chief of Compliance/Goblin Electromancer in play as an example) that kills our opponent no matter what cards they put in our hand or the graveyard. For this series, I wanted to focus and take a closer look at piles that are not as clearly defined.

THE SITUATION – We are playing Affinity and its game three. The screenshot below depicts the board state just before we cast Gifts Ungiven. 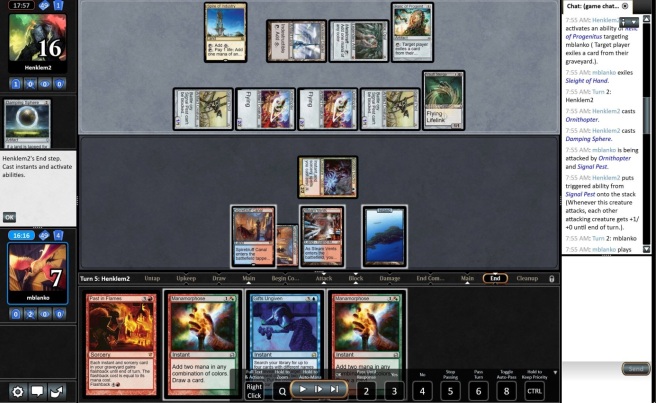 THE DECK – In this league, I was playing Caleb’s exact 75 (as of May 15, 2018) with one change: Precognition Field instead of Echoing Truth in the sideboard. For sideboarding, I followed Caleb’s suggestions by making the following changes:

OTHER IMPORTANT INFORMATION – The key pieces of information not shown in the picture above is the Abrade is no longer in the deck. It was used to kill the opponent’s Damping Sphere earlier in the game (and was exiled from the Relic of Progenitus). The opponent’s last card is almost certainly not Spell Pierce and likely a 3-mana spell. The opponent does not know the contents of our hand.

THE PILE I TOOK – I chose to get a pile of Pyretic Ritual, Desperate Ritual, Engineered Explosives and Shattering Spree. My thought was to get the opponent to crack the Relic of Progenitus with Past in Flames on the stack (for fear of flashing back Shattering Spree), and after the Relic trigger resolved, cast both Manamophose so I can flash them back after Past in Flames resolves.

WHAT HAPPENED – As I predicted, my opponent binned the Shattering Spree and Engineered Explosives leaving me with both rituals in hand. I untapped, drew a blank, and cast one of the rituals followed by Past in Flames. The opponent responded by cracking Relic, and after letting that trigger resolve I cast both Manamorphose, the other ritual and then allowed the Past in Flames to resolve. I flashed back both Manamorphose and the ritual only to draw nothing but more mana bears and lands. In total, I drew five cards for the turn (draw step plus four Manamorphose) and didn’t hit anything.

WHY MY PILE WAS INCORRECT – It was obviously unlucky to whiff in five draws, but I could have avoided this by picking a better pile. My biggest mistake was incorrectly assessing how much mana I needed. With the Manamorphoses in hand, I had enough mana be able to play around the Relic of Progenitus with Past in Flames without the second ritual.

GIFTS PILE OPTION No. 1 – Immediately after the match, I knew my mistake and began to think about other possible piles. My first initial thought was the following: Engineered Explosives, Shattering Spree, Desperate/Pyretic Ritual and Manamorphose. This is very similar to the pile I took, but allows us to draw two more cards (assuming the opponent gives us the ritual and Manamorphose). While this pile is slightly better than the original, after consulting with Brandon, we think there are better options.

GIFTS PILE OPTION No. 2 – Using the same thought process (with better execution) as my original pile, we came to the following: Engineered Explosives, Shattering Spree, Pyretic/Desperate Ritual and Gifts Ungiven.  If the opponent bins Engineered Explosives and Shattering Spree, they are deterministically dead by the following sequence: Ritual, Past in Flames (opponent responds by cracking Relic, Manamorphose, Manamorphose, Gifts Ungiven (standard issue kill). Again, if the opponent does not crack Relic, we get to Shattering Spree most of the board.

OTHER GIFTS PILE OPTIONS – Probably the most intriguing thing about this scenario to me is the fact that we have Noxious Revival in our deck as a potential Gifts target. I’m curious if there’s a better pile involving Noxious Revival (responding to our opponent cracking Relic which we can force with Past in Flames).

MY CONCLUSION – I believe that of the three options above, No. 3 is the best. It’s the safest option that allows us to wipe their board and go off the following turn. Option No. 2 has the highest upside as a kill is possible that turn, but the downside is if the opponent gives us Pyretic/Desperate Ritual and Engineered Explosives, we don’t have a for-sure follow-up play next turn after cleaning up some of the board with the explosives. This also can leave us dead to a top-decked Cranial Plating or Arcbound Ravager.

CALEB’S PILE/THOUGHTS – Given the above parameters, my inclination is also that they do not have Spell Pierce as they would use it on Gifts Ungiven. Thus if Gifts Ungiven resolves (and our bear not blasted), we can reasonably assume the opponent is in “F6-mode.” Now my thought process is to see if I can think of piles that will let me put them in “check” so they will be forced to pop the Relic of Progenitus, with maybe a possible fail case of blow up the world/mow the lawn. There aren’t any deterministic piles that successfully, “check” the opponent, but my selection is close. Here I would choose Desperate Ritual, Noxious Revival, Shattering Spree, and Gifts Ungiven. This gives us the following possible scenarios, also assuming what we draw are blanks. The cards listed below go in hand.

Gifts Ungiven, Ritual: Here we cast Ritual, then Manamorphose and then cast Past in Flames. Now they need to pop the Relic or die. If they do, we let it resolve then Gifts and win. If not, we just keep gaining value out of the graveyard with Rituals and the gifts in there. Plus we have Noxious Revival and another Manamorphose in hand to pluck out something to always be safe.

Noxious Revival, Shattering Spree: same as above only respond to Relic crack with Noxious on Gifts then Manamorphose and win.

Noxious Revival, Gifts Ungiven: Noxious on upkeep targeting Ritual, if they crack we win, if they do not, reduced to scenario one.

Ritual, Noxious Revival: We start out the same as scenario one, and if they respond to Past in Flames (PIF) with the Relic crack, we Noxious Rivival the Gifts then after that resolves with PIF still on the stack we Manamorphose and Gifts, then we win. If not then we reduce to scenario 1 again with the Noxious rescue button.

Ritual, Shattering Spree: This is the fail case of all the scenarios. Our plan here is to Ritual and kill Mox Opal, Relic, both Signal Pests and Vault Skirge leaving them with virtual nothing. We likely have time to assemble a likely PIF next turn or after without likely dying.

Well that’s a wrap for the first installment of the “What’s the Gifts Ungiven Pile” series! Feel free to drop a comment on the scenario or anyway to improve this going forward. Exited to keep learning and improving with everyone!