*My vision is to weekly or bi-weekly highlight some of Storm decks that have placed in large events (SCG events, Grand Prixs, MTGO events, etc.). This is the first of these.

Star City Games hosted its Season One Regional Championships as part of the SCG Tour last weekend (June 2, 2018). Magicians came out to 13 different cities across the country for Modern action! The forecast for the weekend proved very stormy as Storm took down three regional titles. No other archetype won multiple regional titles. Without further ado, let’s get to some lists!

Plug, for those who don’t follow Caleb’s stream on Twitch, you should. I’m a subscriber and have learned a lot from him streaming the deck.

Sam Powers also took Storm to a fourth-place finish in the event. 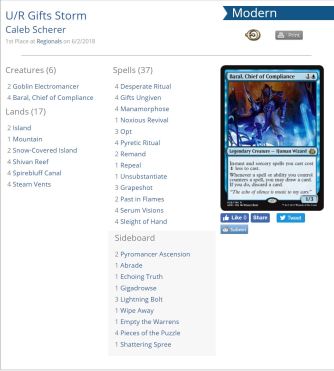 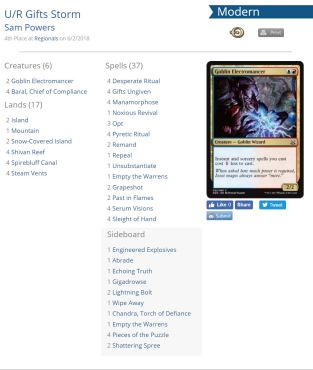 Caleb’s decklist and Sam’s decklist are exactly the same main deck with one difference -Scherer is playing three Grapeshots while Powers has chosen a copy of Empty the Warrens as his third win condition. I tend to be in the camp of three Grapeshots as drawing multiple Grapeshots is often a way the deck wins. Empty the Warrens does have its merits, however, in certain matchups such as BGx or Jund style decks and control variants. As for sideboards, the biggest difference comes in the cards the two players have brought for grindy matchups. Caleb elected to throwback to Pyromancer Ascension while Sam played a Chandra, Torch of Defiance along with a copy of the versatile Engineered Explosives.

Plug, Paul also runs an awesome Twitch stream that you should checkout! Link to both Stormbrothers’ Twitch pages are in the “Resources” tab above.

One thing to note from these two lists, both Caleb and Paul have shaved to just one copy of Empty the Warrens in the 75 to make room for three Lighting Bolt alongside the single copy of Abrade. I’m assuming both individuals were expecting an aggressive meta, which makes sense due to Humans continuing to sit atop the Modern metagame.

Third, Bryant Cook won the Liverpool Regional in New York. For those who might not be aware, Bryant is the creator of The Epic Storm (TES) archetype and a very good Storm pilot.

Plug, Bryant runs an excellent website – TheEpicStorm.com – dedicated to TES in Legacy. I have TES built in Legacy in paper & on MTGO and have learned so much from the content Bryant creates and publishes on his website. My vision for this website (will hopefully be upgraded from a blog to a website here soon) on Modern Storm is gleaned from his product. 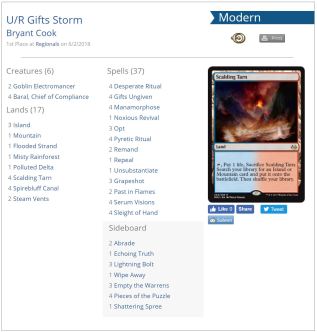 At first chance, it appears Cook is playing the same 60 as Scherer and Muller. One big difference, however, is the manabase. Bryant is playing the Modern-staple fetch lands while Caleb and Paul have been advocates for a fetchless manabase. I’ll go into more detail about the difference in the two in the soon-to-be-created “FAQ” section, but I wanted to note the difference here.

Cook, along with the SCG Stormbrothers, assumed an aggressive metagame as he brought three Lightning Bolt and two Abrade to battle in the sideboard. Also of note, Bryant went heavy on the Empty the Warrens plan in the board. I’m guessing that’s due to him playing with it a ton in Legacy TES and wanting to be explosive in post-board games.

Three other individuals recorded Top 8 finishes at Regionals. Jose Rios took fourth place at the Lewisville Regional (Texas) as well as my good friend Brandon Dollaway, who also took fourth place, at the Frankenmuth Regional (Michigan). Both played the SCG Stormbrothers’ list while Rios opting for the second Empty the Warrens over the third Lightning Bolt in the sideboard. Zach Bishop finished in fifth place at the Lexena Regional (Kansas) with the same list with one change – cutting an Opt for a Lightning Bolt main deck.

All in all, it was a GREAT weekend for Storm, taking down three regional titles in addition to several other Top 8 finishes! What do you think is most interesting about these lists? Give a comment or tweet at us (@StormModern) on Twitter.